Families and characteristics of bacteriophages, the indicator microorganisms of feacal and viral water contamination. 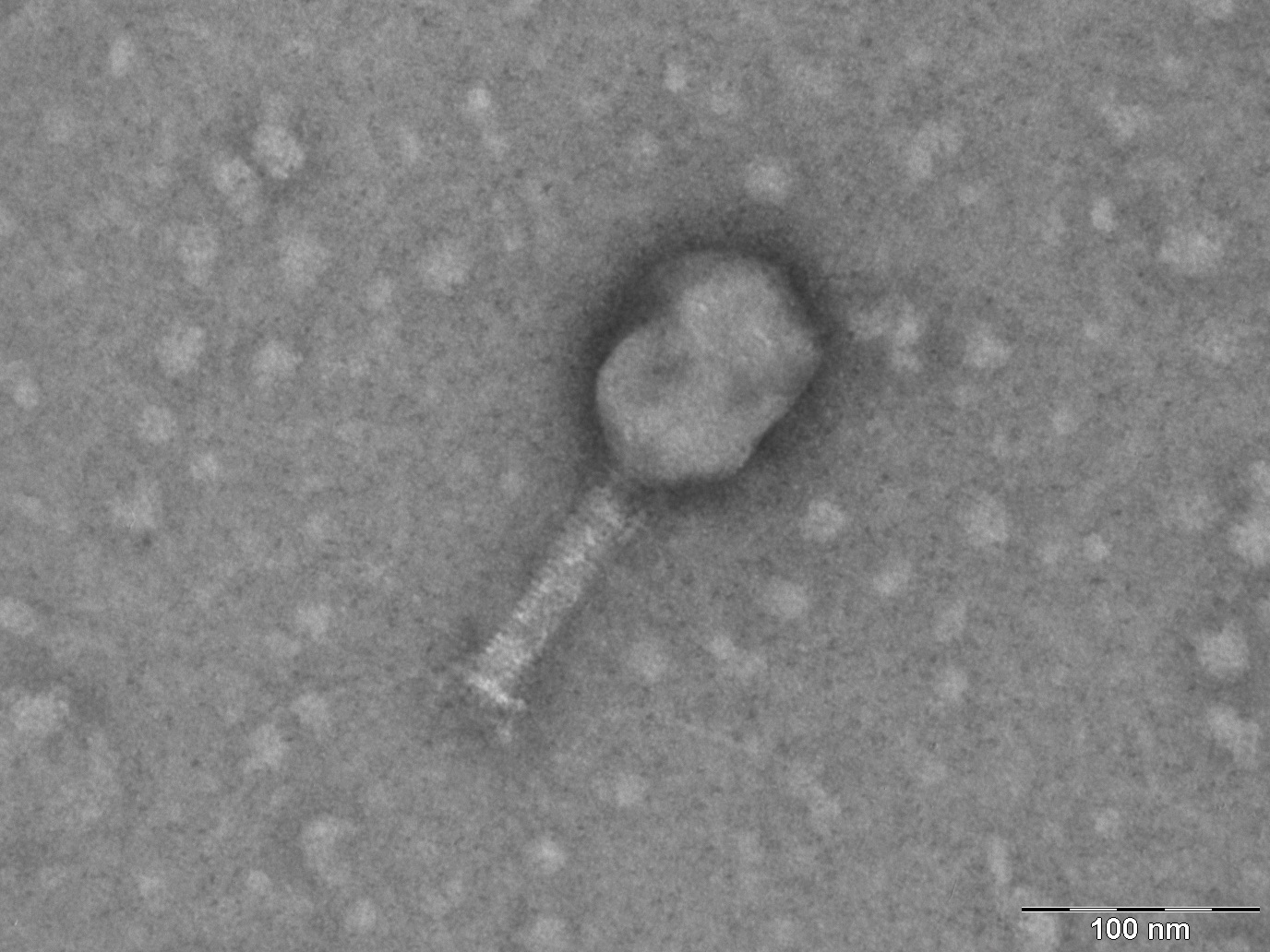 In their extracellular phase (virion), bacteriophages consist of a nucleic acid (double-stranded or single-stranded RNA or DNA) surrounded by a protein coat called the capsid. The capsid may have additional external structures such as tails or spicules and, less frequently, an outer lipid coat.

1. Persistence in the environment:

Due to their structure and composition, virions can persist in the environment and resist natural and anthropogenic stresses.

Bacteriophages that infect enteric bacteria persist better in the environment than their host bacteria when outside the human intestine.

2. Coliphages can infect multiple bacteria or only specific strains:

A phage can have a vast range of bacteria to infect or be very specific to certain groups, even affecting only specific strains of the same bacterial species. This depends on the receptors expressed on the host’s cell surface, to which the phage binds, initiating the infection process.

Phages replicate through two cycles: lytic and lysogenic. In the lytic cycle, immediately after infection, phages multiply and eventually rupture the walls of their hosts from the inside, releasing a progeny of between 10-1000 individuals depending on the phage and the physiological state of the bacterium. Virulent phages that follow this cycle can complete it in times as short as 30 minutes.

In contrast, temperate phages follow a lysogenic cycle, during which the phage injects its DNA, which is integrated into the bacterial genome (prophage) and replicates together with it. This situation is maintained until the prophage is induced (spontaneously or by external factors) and reverts to its original state by cleaving from the genome and following the lytic cycle, generating new progeny.

4. Functions of bacteriophages in nature:

Phages play multiple roles both in nature and in their potential applications. For example, they have a relevant impact on the organic matter cycle in the biosphere and control microbial diversity by selecting bacteria resistant to their infection. At the laboratory level, they also play multiple roles as models and molecular tools in phage typing of bacterial strains, phage therapy applications, evolutionary models, and indicators of fecal contamination. 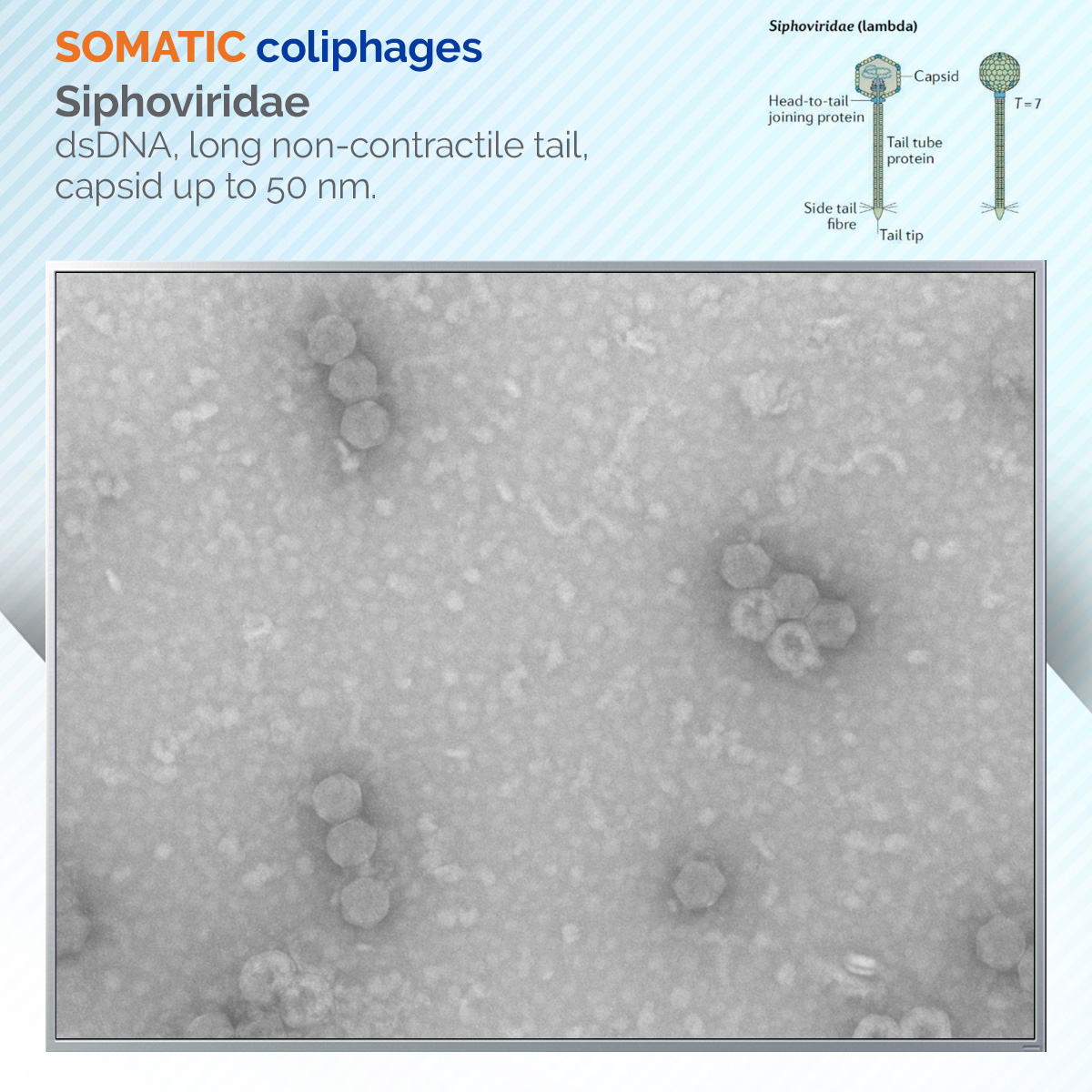 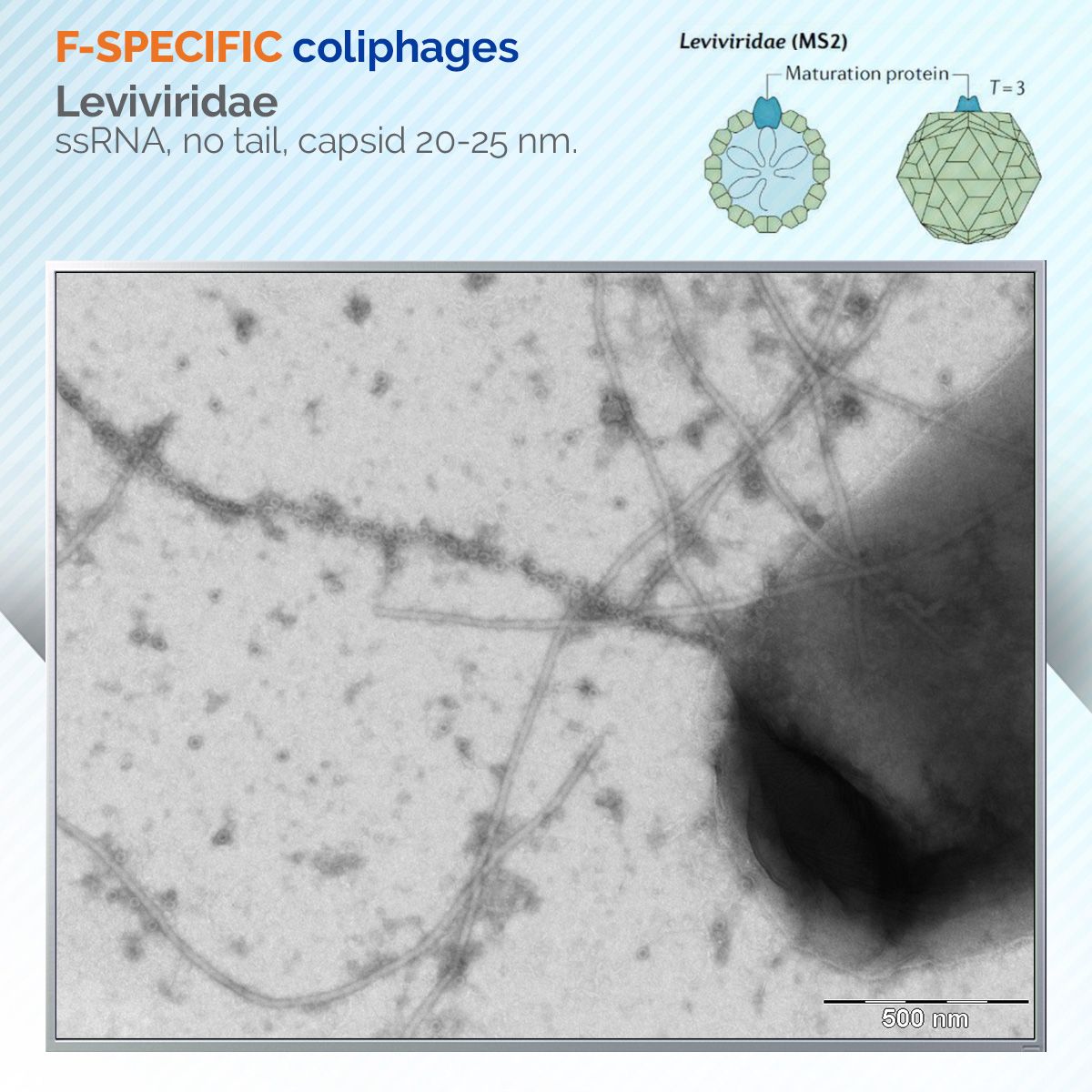 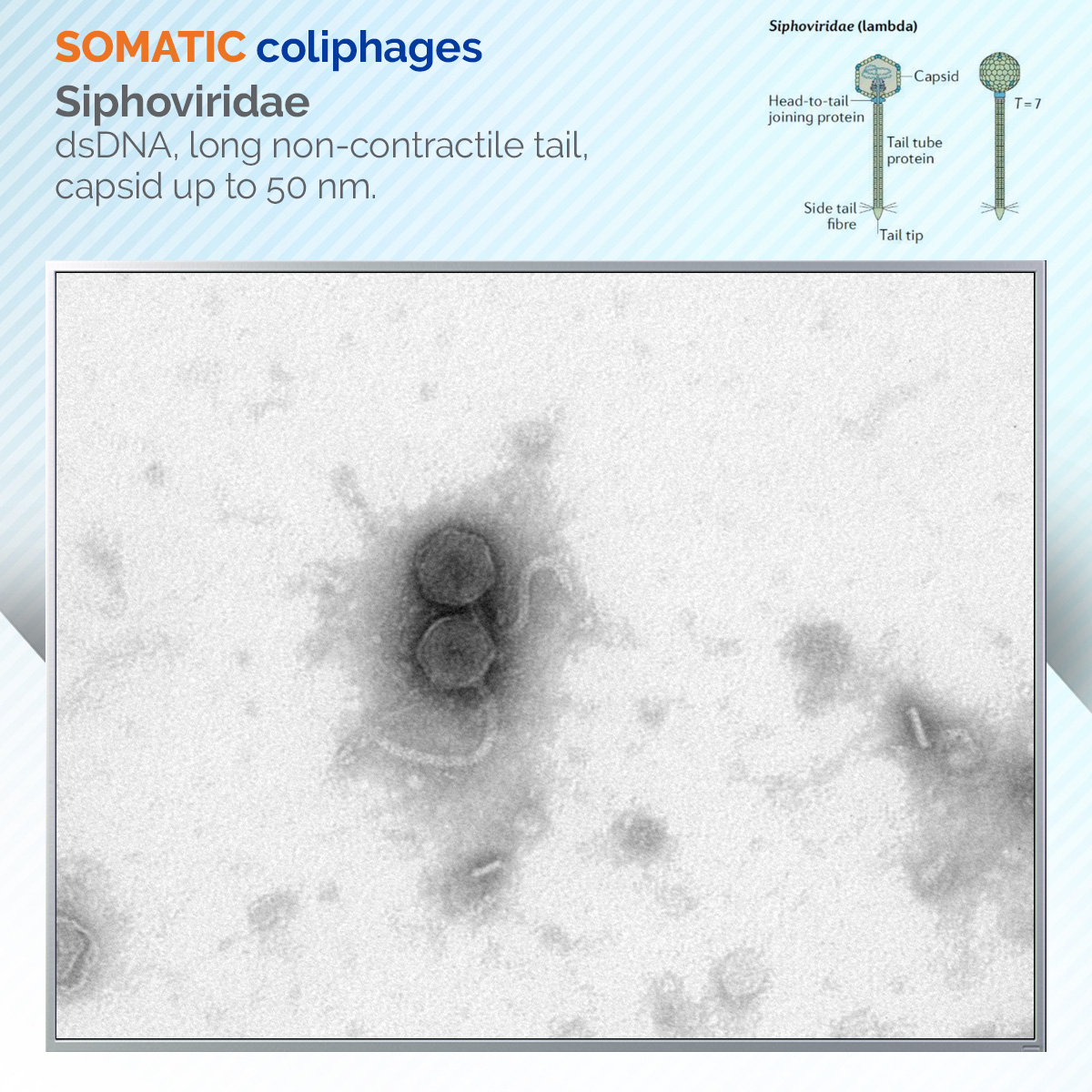 The host strains of these coliphages belong to E. coli and/or species of other related genera such as Shigella and Klebsiella. Under optimal physiological conditions, somatic coliphages can lyse their hosts in approximately 30 minutes, releasing between 100 and 1000 phages per infected cell, and in plaque assays, their lysis plaques exhibit a wide variety of sizes and morphologies.

F-specific coliphages are phages that infect E. coli and other coliform bacteria of the intestinal tract through the F plasmid-encoded sex pili of the E. coli K12 strain. They mainly belong to two virus families: Inoviridae (F-DNA) and Leviviridae (F-RNA). Without action other than using a host strain that synthesizes the F pili, both groups (F-totals) are detected. The differentiation between the two groups of F-specific coliphages is achieved by adding RNAase in the culture medium since this enzyme would degrade the F-RNA phages leaving only the F-DNA phages.

Because of their greater similarity to enteric viruses, F-RNAs are more often studied as indicators of fecal contamination.

Bacteriophages infecting Bacteroides strains are present in faecal or fecally contaminated samples and can be used as faecal indicators. So far, the vast majority of the bacteriophages described in this group, both morphologically and genomically, belong to the Siphoviridae family.

They are somatic bacteriophages, as they infect through bacterial cell wall receptors, and usually have high specificity for a given host. Bacteroides spp. strains differ in their ability to recover phages from different fecally contaminated aquatic matrices and in their ability to detect phages from different animal species. For this reason, they are very useful for the determination of the origin of faecal contamination (Microbial Source Tracking (MST)). In the case of these phages, replication in the environment is even more improbable due to the strict anaerobiosis requirements of the host strains and the need for specific nutrients whose presence is improbable in natural aquatic environments.

Percentages of prevalence in feces of each phage group:

In the case of wastewater, the three phage groups present prevalences of 100%.

After wastewater treatments, bacteriophage values usually decrease between 0.3- 3.0 log units from the initial concentrations depending on the treatment.

Choose the Bluephage kit that best suits your laboratory’s needs for detecting coliphages in water. 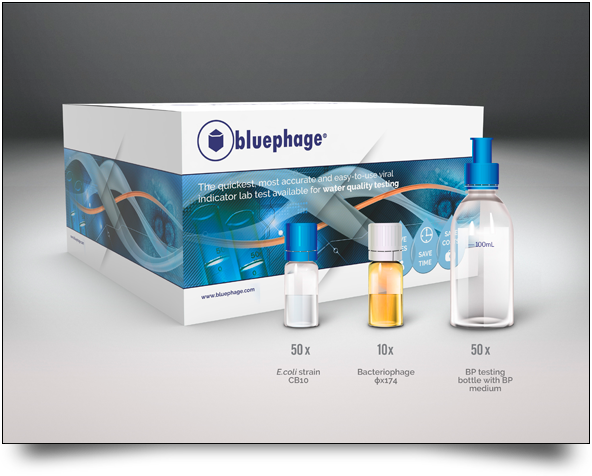 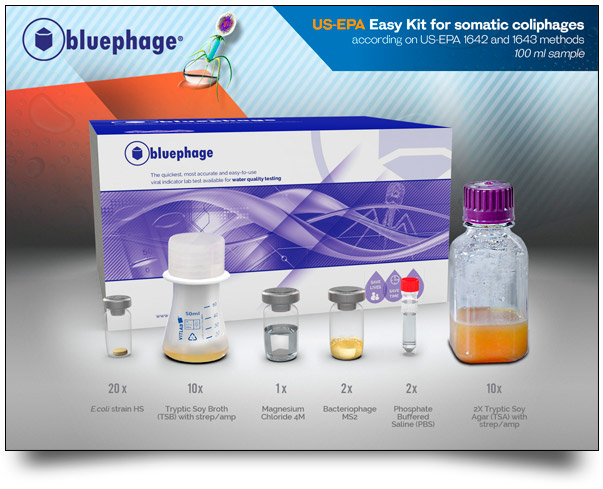 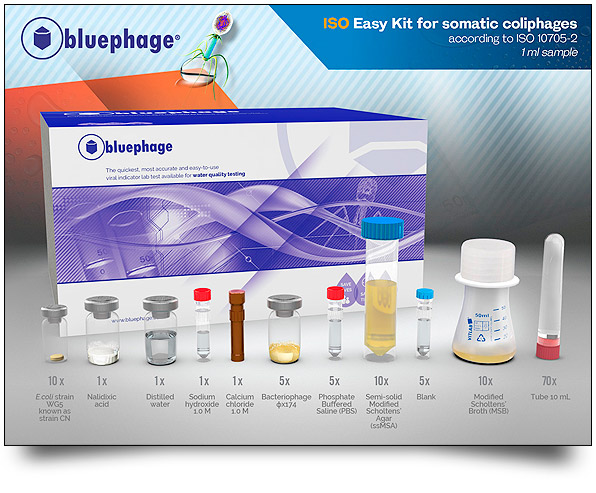